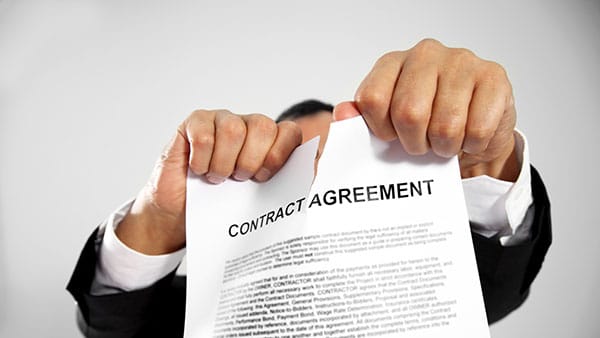 An anticipatory breach of contractanticipatory breach of contract: when a party to a contract ... More entitles the innocent party to terminate the contract and seek damagesdamages: in litigation and dispute resolution, financial com... More. The entitlement will arise where, before the time for performance, the other party indicates its intention not to perform and thereby repudiates the contract.

The innocent party then can elect to affirm the contract (ie. to treat the contract as remaining on foot) or to terminate the contract and seek damagesdamages: in litigation and dispute resolution, financial com... More.

The difficulty in making a claim for anticipatory breach comes with making certain, subjectively and objectively, that the other party does not intend on performing its obligations. It is not enough to think the other party will breach the contract and it would be an incredible risk for one party to terminate the contract in the mere belief that the other side is not going to perform. In such circumstances it would be safer to wait for actual breach.

Terminationtermination: in contract law, the cessation of the term of t... More for anticipatory breach requires an intention not to perform and this should be so clear from the words or actions of the other party that it would be unambiguous to any impartial person.

In the cases of The Hermosa [1982] and SK Shipping (S) Pte v Petroexport Ltd [2009], an emphasis was placed on identifying renunciation, which is a clear intention by one party not to perform its obligations. The guidance provided was that the refusal to perform must:

The ability to terminate for anticipatory breach will come down to the facts of each case. South Bank Legal is a London based commercial law firm who can provide advice on breach of contract claims. For a confidential discussion about any the issues discussed above, please feel free to contact us.